Watch this scene »
We reported in the February 1995 SCORE that superstar Busty Dusty would soon retire from dancing and magazine modeling.

"Okay, I'm quitting because gravity will be taking effect soon," Dusty said in an interview published in the April 1995 issue. "It's really because I'm just human and I'd like to be moving on to other things now. I've had a good run at dancing and modeling, but it's just time for me to lead a less hectic life. I love refinishing antiques, and it would be nice to have a quaint little store, work regular hours and lead a normal life. I don't know where I'll be, but I'd prefer it was somewhere out in the 'sticks' because I love nature. I love running around nude in the grass."

Dusty went on to sail three times on the Boob Cruise, start a website and make numerous stage and TV appearances. Dusty officially retired in 1999. She was inducted into SCORE's Big-Boob Hall of Fame in June 2003. 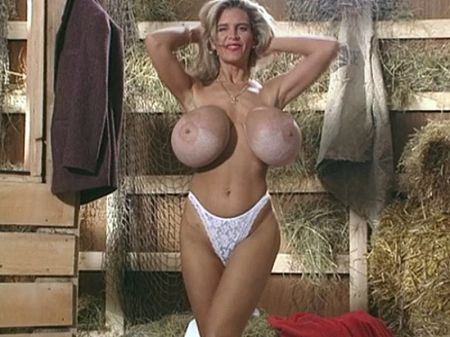