Watch this scene »
"Jeannine Oldfield was studying to be a chef when she first called John Graham's London photo studio inquiring as to whether he was looking for models," recalled SCORE founder John Fox, who first met Jeannine in Las Vegas during the Consumer Electronics Show in January, 1989.

"John [Graham] knew he had a great model in Jeannine Oldfield and began to photograph her as frequently as their schedules allowed. Jeannine, being a student, was thankful for the jobs and had obviously become quite comfortable with nude modeling. After all, she had contacted us in the first place, right? And models who contact photographers rather than the other way around often are the type who get a sexual thrill out of being nude in front of the camera."

In this very rare video straight off the original tape, Jeannine is at poolside on-location. She wears a two-piece sundress and changes into a neon green one-piece swimsuit similar to the suits the girls wore on the TV show Baywatch. 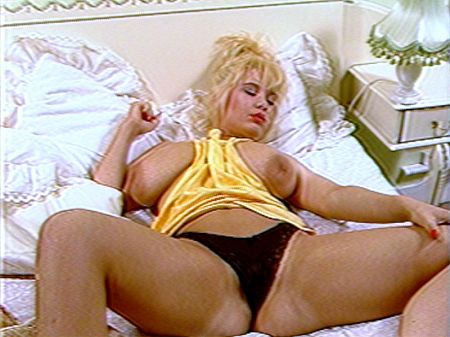