Watch this scene »
Shanelle Staxx was an American big-bust exotic dancer of Mexican ancestry and one of the many feature dancers who travelled to London for SCORE shoots in 1995 and 1997. If you went to strip clubs during the 1990s, you might have seen Shanelle toss her clothes off and get wild.

Video of Shanelle is extremely rare. Not particularly unusual because back then, the girls were more focused on nightclub bookings (often more than 40 weeks a year around North America and overseas) than they were on photo shoots and videos. A few layouts and covers in the big-bust magazines gave them the credits they used on club marquees.

This unedited video with the original audio is in two parts. The first segment was shot on the roof of John Graham's studio. In the second segment, Shanelle does her thing on a studio set. The slang term "dime piece" (meaning a very sexy girl who's a 10) suits Shanelle. She was one hot girl with a gorgeous body and this video explores every inch. 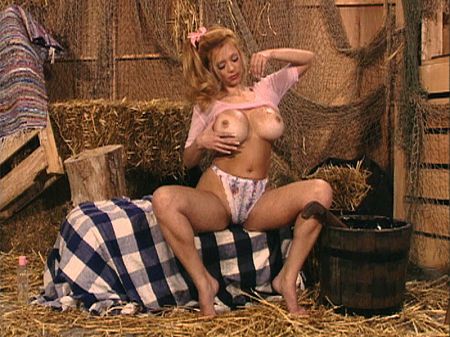